When I recently web surfed into the http://www.havethecake.blogspot.com/ I became really excited!  I liked the idea of trying a new dessert recipe each month and having the freedom of deciding which variation to make.  Not to mention that I did not need to buy a book in order to be part of the baking group!

So rather than waiting less than a week to join the group.  I decided to jump right in and start baking for the April challenge.  This month’s host was Jen from pieces of me and she chose to do Flan.  I was familiar with flan because I remember my mom making Flan for us.  It was a great challenge because I definitely had wanted to try making it myself.  One of the hardest parts of making flan is the carmelizing of the sugar and making sure that you do not burn your sugar.  Additionally, you have to keep your fingers crossed until the flan is done baking and hope that when you turn it out onto a plate it comes out in one piece.

My parents were coming into town and I decided to have a mexican themed dinner.  Therefore, I chose to make a Mexican Flan recipe AKA Best ever Flan: Flan al Tequila that I found here http://aromasysabores-heidileon.blogspot.com/2009/09/best-ever-flan-recipe-la-mejor-receta.html.   Luckily, since my mom was coming into town I asked her to bring her flan pan that she has used before and it worked out great.  It also helped that I just so happened to have tequila on hand!  Overall, this flan was easy to make and tasted good although I could not taste the tequila.  Surprisingly, my husband enjoyed it enough to go back for seconds and said it reminded him of waffles!  This is a pretty big deal because usually he does not like trying new foods.  Speaking for the rest of us I think we are holding out on this flan getting the Best Ever Flan title 🙂

2) In a saucepan over medium high heat stir the water and sugar together until the sugar dissolves.  Let the sugar mixture heat and resist the urge to constantly stir it.  The color should turn from clear to light brown. Every now and then swirl the mixture so that the color is distributed evenly. 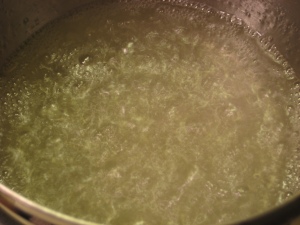 3) When the sugar has carmelized to a light brown color remove from heat and quickly pour into desired baking pan.  Rotate the pan in a circle to ensure that the carmelized sugar is evenly distributed throughout the pan.  Set aside to cool.

4) In a large bowl mix together the condensed and evaporated milks, vanilla extract, eggs, and big dashes of tequila.  Then pour this mixture into the prepared baking pan with the carmelized sugar. 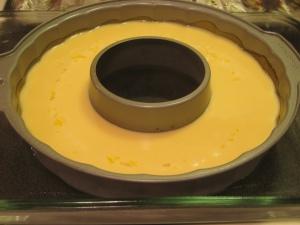 5) Next, place your baking pan that has the flan into a baking dish (I used a 9 X 13 pyrex dish) and make a water bath with hot water about 1-2 inches high.  Place baking dish with the flan into the preheated oven and bake for about 30-35 minutes.  Check the flan with a knife to see if it is finished.  When the knife comes out clean the flan is done.

6) Remove the flan from the oven and let cool.  Place in the refrigerator for at least 2 hours.

7) Invert the flan onto a plate and admire your baking!

2 Responses to “My 1st Have the Cake Post: Mexican Flan with Tequila”